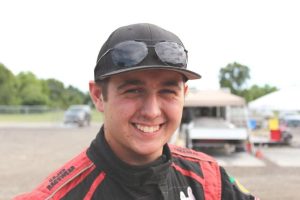 At 18 years of age this second-generation driver made his first start as a racer. It was clear right from the first day, that he had watched his father and those around him and learned well. Running up front consistently brought Clay two valuable awards in that first year, Clay finished third in the South Bend Speedway Hornet division. That third place in the final points standing also garnered Clay the 2018 Hornet Division Rookie of The Year.

Clay and his team took an exponential jump forward in the motorsports world coming directly from the Hornet division directly to the premiere division of short track stockcar motorsports, the Super Late Model division. This proved to be the correct move for Clay and his team, clay immediately showed his smooth consistent calculating style. Clay and his team ran at two different tracks for the 2019 season amassing a list of impressive year end awards.

The competition level at these two speedways is among the best in the Midwest for weekly racing. Both South Bend Speedway and Grundy County Speedway have proven over time they produce some of the best driver/spokespersons in the Midwest. Several Midwest Champions have trained, as it were at these two venues. The magnitude of this jump in competition from the Hornet division to the Super Late Model division at these two tracks is truly something you do not see every day.

In 2020 Clay continued to show his consistency at Grundy County Speedway, with solid finishes each week. The hard work of Clay and his team generated a sixth-place finish in the final points standing.

Clay made a big push to the front in 2021 at Grundy County Speedway. Clay pushed a multi time track champion to the very last laps of the season, falling just a few points short of a championship to be second in the final season points.

Clay is a seasoned veteran of racing as he has grown up at the short tracks of the Great Lakes Region working as a mechanic of various levels throughout his life. His driving career is short and brilliant, Super Late Model Racing from weekly to national tour racing is the most competitive and professional form of short track stock car racing. Clay has shown he is consistently up front with a professional looking team.