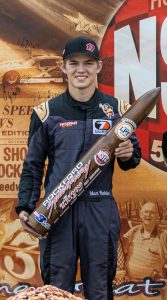 In 2016 at the age of 13, Max started his Late Model racing career. As a second-generation driver Max began racing at Jefferson Speedway, in Cambridge, Wisconsin, where he became the youngest driver to win a qualifying race.

Max Kahler Racing finished fourth in the points standing, in the 2017 season Max was named Rookie of the Year for 2017. This was a historic event as Max became the youngest driver in the then 70-year history of Rockford Speedway.

More accolades came in 2018, as Max and his team finished third at Rockford Speedway points standing. This also propelled Max to a second place points place in the State of Illinois NASCAR weekly racing series standings. And finished the season with a second-place finish at the prestigious Rockford Short Track Nationals.

For the 2021 season Max and his team continued their growth as racers and as a spokesperson. Max and his team participated in the TUNDRA Racing series, the Alive for 5 series and a variety of ARCA Midwest Tour events and the Slinger Nationals. Max Kahler racing finished the season with 2 wins, eight top five, and eleven top ten, in the premier level of short track motorsports in the Midwest.

In 2021 Max was a participant in the Alan Kulwicki development program. This program not only helps a racer on the track, but this program also assists spokespersons in motorsports how to brand your company.

These successes have driven Max Kahler Racing to invest in a new car, Max and his team are defiantly a team on the upward trend.