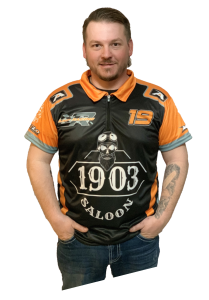 Jake Jump started his racing career in 2003 at the age of thirteen, running weekly in the Minicup Series at State Park Speedway, racing adults twice even three times his age and with a great deal more experience than this rookie.

That first-year experience was put to significant use in 2004, when Jake won the State Park Speedway Minicup championship in just his second year.

Jake was out of the driver’s seat for a period while attending the NASCAR Technical Institute in Mooresville, NC. After graduation Jake returned to be a key member of several asphalt and dirt teams, continuing that education with the firsthand experience of working with these teams.

In 2020 Jake partnered with Travis Wiesenbeck a Pro Late Model car owner out of Wausau, Wisconsin. Travis and Jake were in competition weekly at the highly competitive Dells Raceway Park. Jake was in his rookie season at Dells Raceway Park and in a full sized Pro Late Model. They made great progress; however, they knew they had more in them as a team.

Jake and his family purchased their own Pro Late Model for 2021 and hired full-time crew chief Josh Schmidtke. This proved to be the right move for Jump Racing, finishing the season with 3 top five finishes, 5 top ten finishes, 7 fast dash appearances and a 5th place finish in the season point standings at Dells Raceway Park. This led to the Pro Late Model 2021 Most Improved Driver Award.